Garden visiting is fraught with problems as I recently talked about in my guest post at Gardening Gone Wild. Last week Prince Willem-Alexander opened this year’s bulb festival at the Keukenhof in Lisse, South Holland; the theme had something to do with celebrating how much the Germans spend on Dutch bulbs! Anyway, spurred on by the press photos following on from an all-too-long winter, I decided to pay my own kingly visit to the show gardens earlier this week.

As all good photographers know the camera can hide as much as it reveals and this was painfully the case on this occasion. I suppose it has been colder outside of the city than I had realised because there was so little in flower. I remember years when in late March the green rolling landscape of this fine park was stroked with sharp drifts of colour that enhanced rather than dominated the scene, but not this time. Even the earliest tulips looked pensive, the brash crocus had the park to themselves.

The swans on the lake know their place and paraded themselves around the only headland with anything significant in flower – a quite respectable field of Kaufmaniana Group tulips, but for the rest, if it hadn’t been for some art sprinkled over the landscape my royal visit would have been even shorter than convention dictates.

On a serious note, it was interesting to see just how much the placement of the spring bulbs affected their flowering. Not only on the headland by the lake, but also in one other open sunny location, the display of waterlily tulips was well worth a picture. Compare this picture with the one below where the same tulips are growing near to a woodland edge and you can hardly realise it is the same cultivar – ‘Corona’.

The placement of art in the garden is rarely handled well. Scale is the key even at the expense of refinement. There is also the problem that once a gardener decides to add real art to their gardens they tend to want to add more and more until the end result is a gallery display and not a garden.

The art show in this year’s Keukenhof seems better than usual with some rather good bold pieces. The one I liked most I didn’t even photograph as it was far more interesting to walk around and observe how the square stone block in its heart contrasted with the subtly asymmetric metal frame that supported it, but the large dice with designs clearly inspired by the Eames House of Cards worked well in their green setting. Whether that will still be the case in three weeks time when surrounded by a kaleidoscope of colour remains to be seen.

The sculptures of famous composers also gave me the chance to play with my new flash light, but this had its drawbacks as I had to more than once stop to explain to other visitors how it worked without actually being attached to the camera. Clearly there are more ways to enjoy a garden than simply looking at/for the flowers.

The queen that visited my garden later that day had also time to kill and used it to feed the birds with the seeds she had collected the previous year. Part of the etiquette of garden visiting is knowing how to treat your host and show appreciation of their efforts. In early spring the danger is that The Queen herself will steal the show and perhaps for that reason royal visitors understand that they should not hang around for too long. My own visit to the Keukenhof was brief and did not offer what I had expected, but overall it satisfied me. The queen who visited my garden was gone as quickly as she came, she didn’t say a lot, but the memory of her presence will never leave any who were lucky enough to catch her amidst my early tulips. 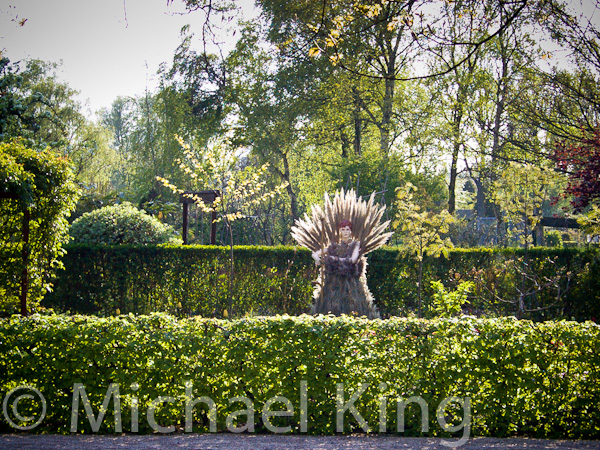 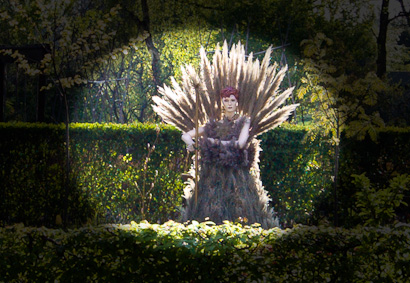 2 thoughts on “The Queen pays my garden a visit”