Naturalistic is a term being used to describe a modern trend in garden planting design, but what does it mean? You would think it meant “like nature”, but none of these so-called schemes resemble anything I have ever seen in the wild.

The use of this awkward word is an attempt to set such planting schemes apart from the traditional use of plants, and in particular perennials, in garden borders. The aim of such planting schemes is to evoke the feeling of spontaneous, random nature by arranging plants in loose mingled combinations.

Three ideas are at play when we think about naturalistic planting design: firstly the plants used are planted in a seemingly random fashion and repeated across the whole planting area. Unlike a traditional border where plants are arranged in groups to complement and contrast with one another, in the naturalistic border the repetition is a means of emulating the way plants tend to be repeated throughout a meadow, a glade or across a hillside. Secondly, the plants chosen symbolize our ideas about real nature; grasses are used to invoke an association with countryside meadows or wild prairies. ferns are used to confer the mood of a shady woodland, and the actual plants used are selected to resemble wild species with small delicate flowers rather than the bold heavy blooms of common garden garden cultivars.

When sensitively composed such naturalistic planting schemes do introduce a powerful atmosphere to the garden spaces they occupy – our response to them being more emotional than based purely on aesthetics as is perhaps the case with traditional herbaceous borders where colour is often an important design objective.

The final factor that distinguishes this new trend in planting design is the very careful selection of plants to ensure that they are well adapted to the existing growing conditions and garden habitat. Rather than manipulating the conditions and forcing plants into unnatural associations, these new schemes are constrained by their garden landscape and tend, as a result, to look more at home and at the same time need far less care and attention to grow well; resources are conserved which is a vital contemporary concern. 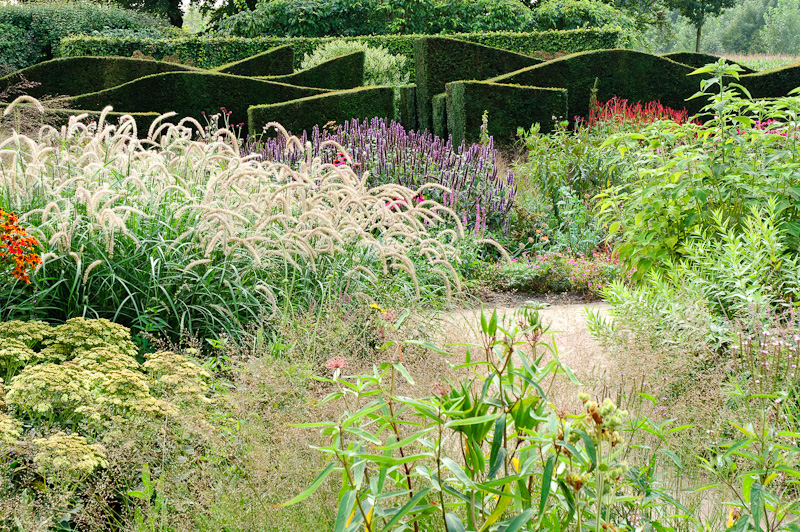 This example of naturalistic planting in the private garden of the Dutch garden designer, Piet Oudolf, shows a powerful contrast between the loose, mingled perennials and the tightly clipped hedges in the background. Clearly atmospheric, but far removed from real nature.