Perennial meadows fill our gardens with drifts of colour and texture replacing labour intensive lawns and dull areas of gravel and ground cover. However, this new trend in planting design has one big downside – the cost of the large number of plants needed! At between six to eight plants per square meter/yard we are talking about at least three hundred plants to fill a border of some 10 by 5 meters/yards in size.

Perennial cultivars can only be increased by vegetative means, but the most common method of dividing root systems in spring or autumn rarely yields more than a handful of plants per year. This is usually enough for the average gardener which is why most gardening books concentrate on the method.

Cuttings are a much more productive method of increasing your stock as they can be taken from many perennials at intervals throughout the growing season. This is the method used by many perennial nurseries.

Growing perennials from seed is something I had never really considered doing until very recently, but with my growing fascination with meadow gardening the idea was well worth pursuing. Most good seed catalogues will offer a limited range of perennials, but my impression was often that the plants were inferior to the highly praised cultivars I wished to use in my planting schemes. But that has all change with my recent discovery of the German seed company, Jelitto.

Jelitto are specialised in the production of seeds for commercial growers of perennials. You may not realise it, but many of the perennials offered to you in garden centres have in fact been grown from their seeds; also many of their seeds are sold to commercial growers of cut flowers. However, they also sell smaller quatities of seeds in packets to anyone prepared to place a minimum order of 25 Euro – and that means you and me.

Any true species of perennials can be grown from seed and their site lists thousands with very detailed growing instructions for each. Those that are difficult to germinate due to the need for a cold treatment are also offered in a specialised range called Golden Nugget seeds which are expected to germinate in just a few weeks from sowing.

Beyond the pure species, what I find most interesting about their product range is their own range of new introductions of carefully bred cultivars that come true an uniformly from seed. These are what we need for our meadows.

For instance, last year they introduced the grass Deschampsia cespitosa ‘Pixie Fountain’ – a low-growing selection. In recent years I have had problems getting hold of true-to-type Deschampsia c. ‘Goldtau’ a fine low-growing cultivar; it seems that nurseries have allowed this cultivar to seed itself into the crown of the parent plants and what is now being distributed is a mixture of taller growing seedlings. I am hoping this new seed race will solve my problem.

Each year they add to their range of cone flower cultivars – last year there was an improved form of ‘Magnus’ the bold, widely grown purple and this year there is a new white to try – Echinacea purpurea ‘Happy Star’. Also, this year there is a most exciting new cultivar of switch grass, Panicum virgatum ‘Emerald Chief’ being offered that has been selected for its excellent autumn tints and the fact that it remains stiffly upright without the tendency of many older cultivars to flop.

I have no connection with Jelitto, but do feel more gardeners should give growing perennials from seed a try and this is one of the best sources I know. There are other supplies to consider such as Thompson & Morgan and Chiltern Seeds as well as many more worldwide – do give them a try.

This summer I will be experimenting with Jelitto’s Rudbeckia grandiflora ‘Sundance’ – taller growing than R. fulgida ‘Golstrum’ and possibly interesting to mix together. Coreopsis auriculata f. nana “Elfin Gold’ which is tougher than the ubiquitous C. verticillata ‘Moonbeam’ with darker yellow flowers and again a possible companion for it. All of these I will be trying out together with Scabiosa lachnophylla ‘Blue Horizon’ – said to be more reliable and longer lived than other cultivars – in a new prairie-like meadow scheme I am planning.

I will let you know how I get on and look forward to hearing your own experiences with growing perennials from seeds. 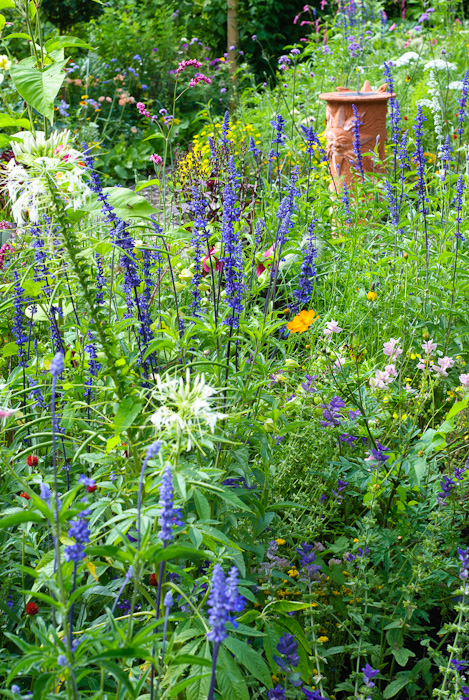