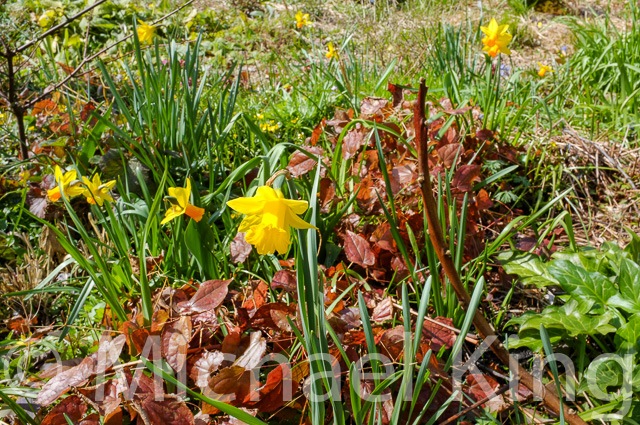 For more than three weeks the weather has been cold, wet and very windy here in the Netherlands, but now it is Easter and it feels like the gardening season has begun. The nights are still cold, but the days are calm and sunny and daffodils dominate the garden; finally it is the place to be.

In every season I take the time to note which plants really make their mark and then try to build upon these highlights to improve the garden’s appearance in future years. Hellebores have been flowering in my garden for almost two months, but it is only now that they are surrounded by a carpet of white Pachyphragma  (see earlier post)  which itself is peppered with clumps of blue Pulmanaria, Scilla and Anemone that they really matter. 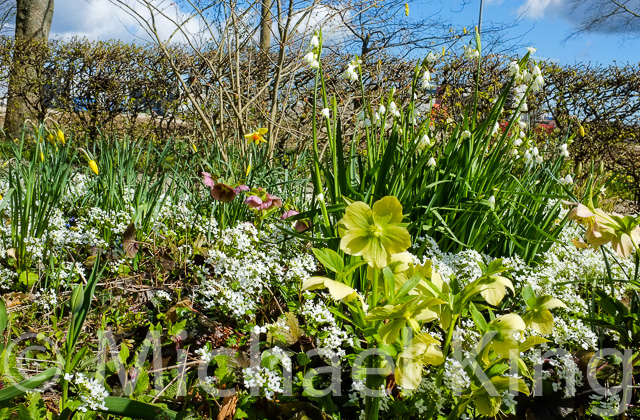 This ground covering carpet of flowers is always at its best in early spring and makes the setting for clumps of the various early flower daffodils I grow. Yes, there are very early flowering Narcissus and also splendid late flowerers, but whilst the former are delightful harbingers of spring, the later must fight for our attention amidst the haughty tulips and brash or beautiful spring flowering shrubs. Only now, in early spring, can daffodils take the leading role and the more I look around my garden this weekend the more I realise how much more I must plan to add to the borders this coming autumn. 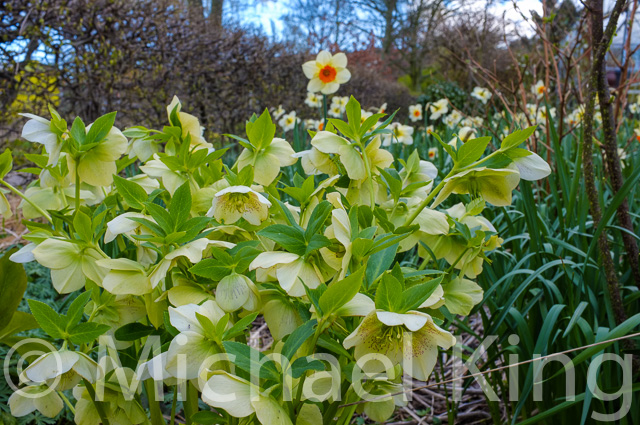 I am trialling a number of winter flowering shrubs in the garden at the moment and many are definitely well worth finding space for – see my eBook on shrub features. Without doubt the one that really matters though is the witch hazel – Hamamelis. I chose to plant two mid to late flowering cultivars (‘Angelly’ and ‘Aurora’), one yellow and the other soft orange, as they flower in the period following the garden’s annual tidy-up when all of the dead debris of last year’s perennials have been removed. Still small, these two plants managed to dominate the garden in late winter and will only get better as they grow larger in subsequent years. With snowdrops below, these shrubs will become the main theme of my garden in late winter in years to come. 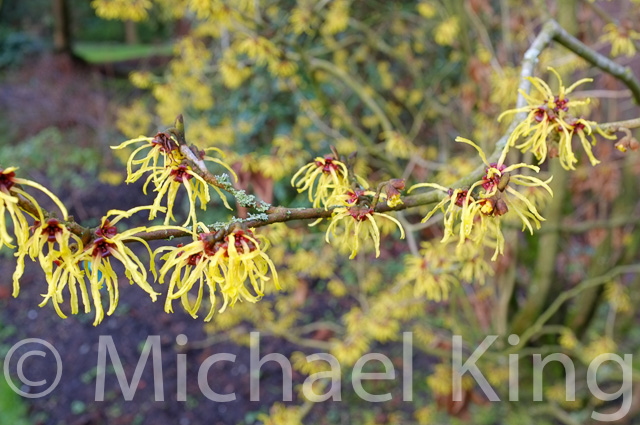 Things move on quickly in the vernal garden and in two weeks time tulips will be taking centre stage. Yes, there are very early flowering species and spectacular lates, but it is the peak of their flowering season that we need to grab and make extravagant use of. Like a crescendo at the end of a piece of music, the tulip must play its part in our gardening plans. I aim to bring you up to date on what is happening here in the Netherlands when I make my annual pilgrimage to the Keukenhof before the end of this month, but for now I am spending time in the garden – open, low and sunny – to enjoy the splendours of the early-flowering daffodils and their chorus line.

1 thought on “The Vernal Garden”