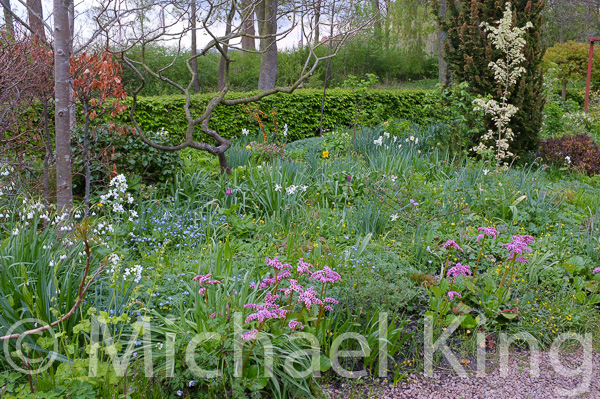 There is a small perennial border in the centre of my garden where for many years I grew a random mixture of plants – all interesting, but as a whole chaotic. Finally, I decided to bring order and a sense of design back to this section of the garden; a garden which is essentially a trial garden and where all design rules can be broken for the sake of trying out a new plant. 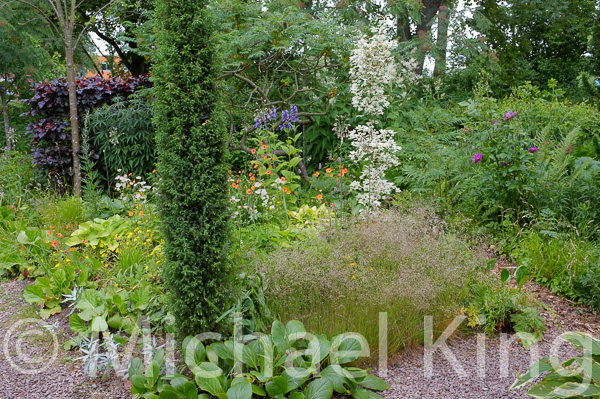 The aim was for an open, relatively low planting scheme over which the eye can travel, but which nevertheless is interesting without screaming for attention. Why not lay a simple lawn you might be thinking and indeed that would serve the same function, but there are far more interesting plants to grow and I am not interested in mowing grass. 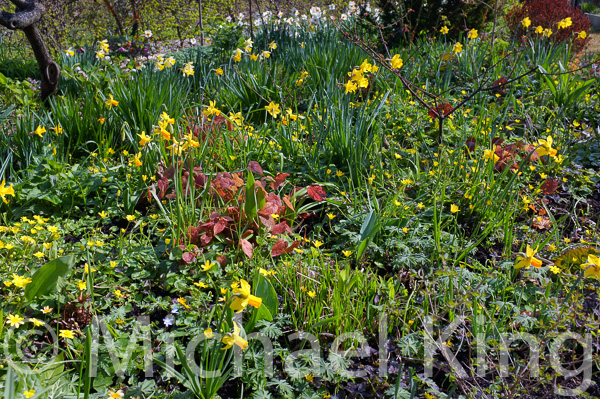 This border is already very beautiful in spring as it contains a collection of early flowering daffodils which are a precursor to a display of purple/blue tulips. The challenge was to replant it without digging up all of these treasures. My trick was to mark the spots where the existing plants were removed from and replant in these same spots without disturbing the nearby soil. It worked, and I only unearthed a handful of bulbs during the exercise. 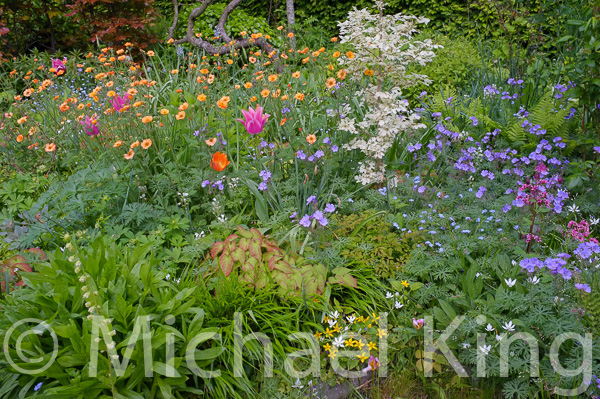 This scheme reuses plants already growing in the garden with the aim of creating a long season of interest. No sooner had I decided that the border must be low than I discovered that the only place in the garden where I could place a magnificiant cultivar of purple moor grass – Molinia arundinacea subsp. arundinacea ‘Cordoba’ – was here. This tall grass creates a wide arching flower display that all too easily hangs over any nearby paths. In its current position it was spectacular by always in the way and this new border – some 4 meteres by 3 meters – was big enough to contain it. 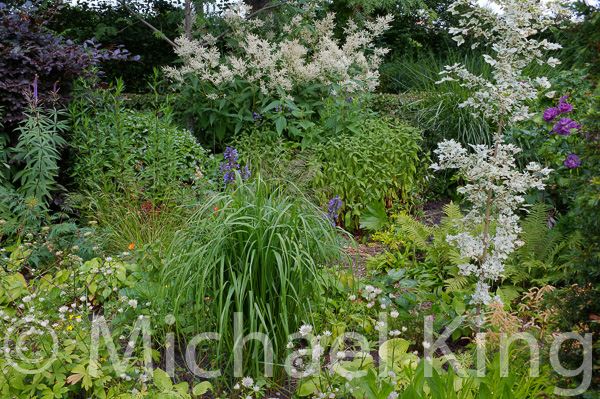 Compromise is a normal part of life and so my new, low, simple border would have to have a dramatic centrepiece! Fortunately this grass is totally transparent even though it grows over head-height so there would not be a real problem. The methodology I have developed for creating perennial meadows is nothing more than a starting point and must not be allowed to become a dogma. If it is to be successful it must be flexible and easily adapted to any given situation and circumstance. 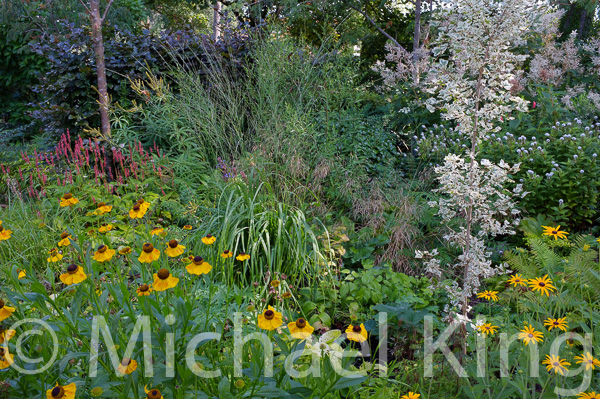 This year the molinia grew tall and arched out magnificently above its neighbours.

The name, perennial meadow, suggests schemes for open sunny situations, but the idea of mass planting a restricted mixture of perennials to create a coherent block of vegetation can equally be applied to the shadier parts of our gardens. In face, some of the most satisfying schemes I have designed using this approach have been for precisely such situations. 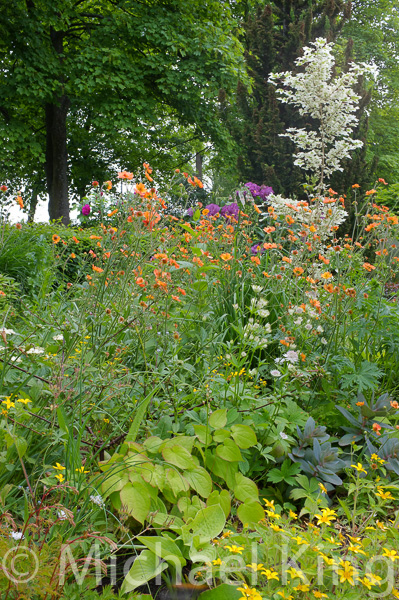 So with the bold arching grass at its centre, the planting scheme was filled in with a random mixture of epimediums, hostas, astrantias, low-growing grasses and aruncus; let me explain what I did:

Epimedium rubrum is a tough early-flowering ground cover that quickly develops spreading carpets of pale green foliage beautifully traced with dark ruddy toned patterns. Its small neat foliage would provide the setting for the larger-leaved collection of hostas I had been hiding away in an odd corner of the garden for some time. In design terms it would have been better to have restricted myself to just one hosta cultivar, but I had five – some plain green and some variegated – these would have to do and none proved too distracting the following year. 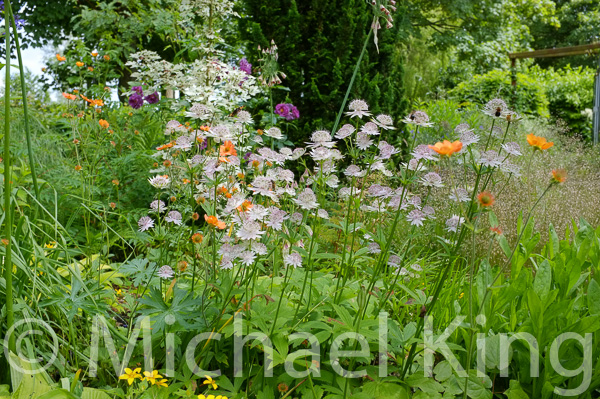 The Astrantia major ‘Buckland’ was already growing in this border. It is a white flowered cultivar which also reflowers for a second time in autumn most years. The grass I have used is a new form of Calamagrostis – ‘Cheiju-do’ – This low-growing grass has yet to win my heart but it has grown well here and will bring variety to the broad leaved plants surrounding it. 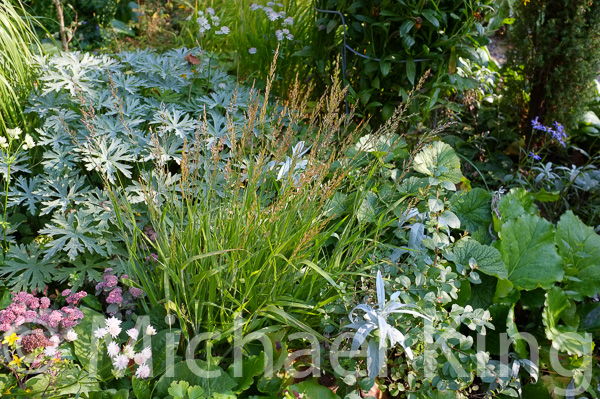 My good friend Ernst Pagels introduced a number of interesting hybrid goat’s beards – Aruncus sp. – some are tall and indispensable such as ‘Horatio’, but some others, such as ‘Sommeranfang’, make low mounds of fine foliage and flower in early summer. I have planted these near to the edges of this new border as yet one more texture to bring interest to the scheme when viewed up close. 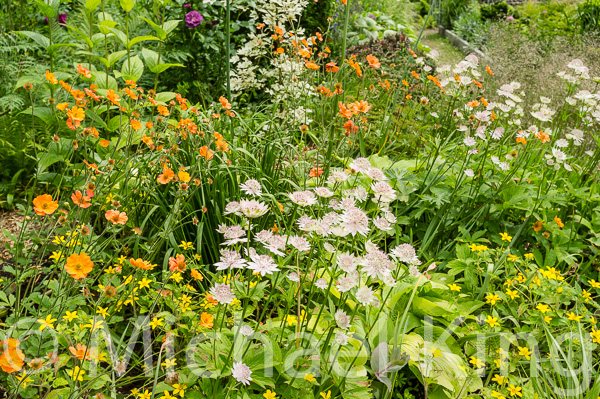 To guarantee a long season of summer colour to this rather green border I added one of my favourite easy perennials – Chrysogonum virginianum. This lowly perennial starts producing its small, star-like, yellow flower in late spring and will continue to flower on into autumn – never dramatic, but totally worthy and perfectly in tune with my intentions here.

So there we have it, a random mixture of simple perennials that should work together to cover the ground and open up this central, semi-shaded area of my garden.

Planting took place just before the end of October 2012 during an interval in the persistent rain that had been a feature of our European summer and winter that year. Everything established well but it wasn’t until this year that the large molinia at the centre of the border was settled and flowered well. This restful area has since become the home of a couple of my growing collection of viburnum shrubs so over time it will change, but for now it has the simple open character that I was aiming for. Such are the games we gardeners can play in our own private spaces.

Happy Christmas to all my followers and merry gardening in 2015.