I have always been uneasy with the term naturalistic planting, not with what it actually means, but with the way it is used in the media to describe any “new” planting scheme in which perennials together with ornamental grasses are mixed in an informal arrangement. 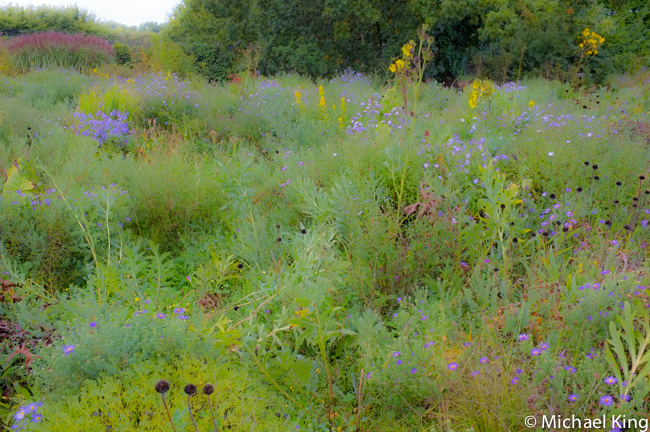 The true underlying principle of naturalistic gardening is the intrinsic chaos that exists in ecological processes that resolve themselves, through a myriad of outside influences, into patterns and plant communities that are distinctive and that can be recognised and categorised by humans. Using the trigger of association, it is possible for us to create planting schemes that recall memories, suggest relationships and aspirations, that together may kindle a host of emotional responses.

When planting schemes succeed in transporting us on such emotional journeys through their associations they earn the title of naturalistic, but not when they simply conform to a look that fits the name.

Below, for those of you who missed it, is a copy of something that I wrote on this blog two years ago about the underlying principles and practices of what I think is naturalistic planting. My question is -” could the “new perennials movement”  be in danger of carpeting our public green spaces with the same “new” look”? Already here in Holland you can order perennial mixtures by the square meter to decorate any landscape.

Naturalistic Planting is anything but.

If there is one word that has crept into gardening lingo in the past decade that really gets under my skin, it is the term naturalistic planting. For one thing it seems to mean different things to different people, and the other irritation is that always we are looking at something totally unnatural.

What is natural, after-all, when there is hardly anywhere on earth that has not been affected by the activities of the human race? Gardens are contrived to embellish our living spaces, to offer somewhere to relax or simply serve to impress as a spectacle. In truth ,the last thing we want is something that is really natural with all the chaos, disorder, death and disease that that would involve. 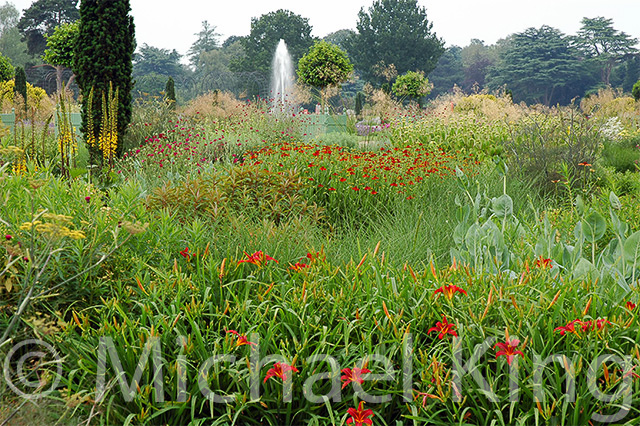 The style of planting, predominantly perennial planting, that is popular today, looks very different to what would have been seen in gardens only some ten or fifteen years ago. The term naturalistic is frequently applied to it and in an attempt to understand what this refers to we need to understand the intrinsic features that set it apart.

Three things distinguish contemporary planting schemes from what came before: content, form and intention. Let’s run through these quickly to see what these three characteristics bring to our new-look schemes and perhaps try and find a better way of naming them. 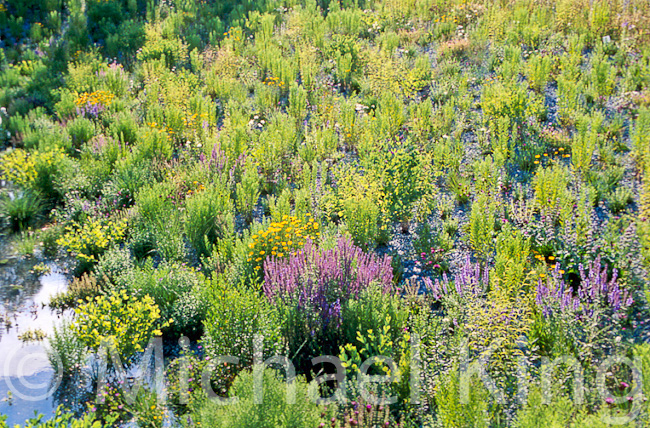 The content of, so-called, naturalistic schemes arises through research that took place in Germany in the middle of the previous century. In essence, the aim was to find a system for using perennial plants effectively and efficiently in public green spaces. Carefully chosen, such plants would create attractive, natural looking, ground cover under trees,, along road verges and within parks and public gardens. Maintenance needed to be simple and cost effective and that meant that only the easiest and toughest plants could be used. The story is more complex than this, but underpinning the approach was the doctrine of planting the right plants in the right place without altering the existing growing conditions.

Instead of using garden cultivars of popular perennials, the wild species were evaluated and selected to create a new aesthetic. Plants with similar competitive strengths were then combined into robust, harmonious planting schemes.

Today’s perennial schemes follow this same principle, although the plant assortment has grown to include more colourful perennials, yet still close to the forms and vigour of their wilder relatives.

The form of contemporary perennial schemes differs greatly from that of the traditional herbaceous plant borders and is, in fact, closely related to their raison d’être. Traditional herbaceous borders are set against a plain background, such as a yew hedge, and approached across a smooth mown lawn. They are created as focal points within a garden design and viewed from outside just like a painting or tableau. They are pure decoration and deliberately artificial. In heavily manured and deeply dug soil, a diverse range of perennials are brought together and arranged by height and colour to create a show-stopping spectacle. They demonstrate the skill of the gardener, require regular replanting and adjustment not to mention meticulous staking, feeding and watering to remain looking good. Typically, their season is mid to late summer with little to offer before or after, unless of course they are compromised to becoming mixed borders with the addition of spring flowering shrubs and bulbs. All of this sets traditional herbaceous borders apart from today’s desire for naturalism. 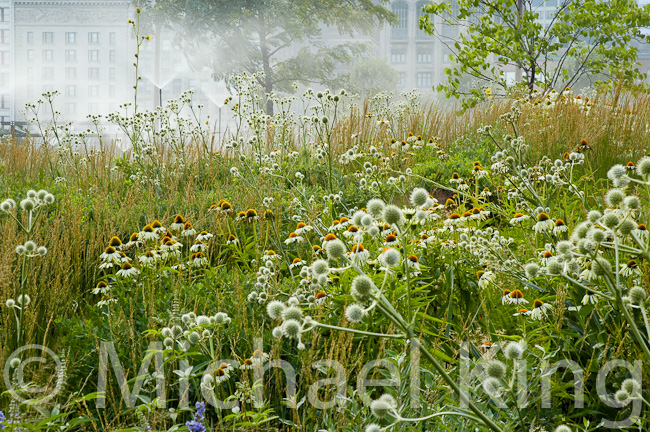 The intention of today’s schemes is to make an emotional connection with those things we consider natural. We call them naturalistic because we want to experience the freedom of the open field, or meadow, or prairie that is far removed from our urban existence. By using a more wild looking assortment of plants and arranging them in sweeping drifts and intertwined mixes, we seek to emulate the feeling of spontaneous nature within the confines of our back gardens and local parks.

To enhance the experience we no longer view our planting schemes from outside, but rather need to enter into them to feel surrounded by the field of flowers. Their scale is therefore larger, filling their garden spaces, perhaps replacing a central lawn with wide areas of perennials crisscrossed by a network of paths.

Regular or informal in outline, the new trend is for an association with nature to be created no matter how artificial the setting. 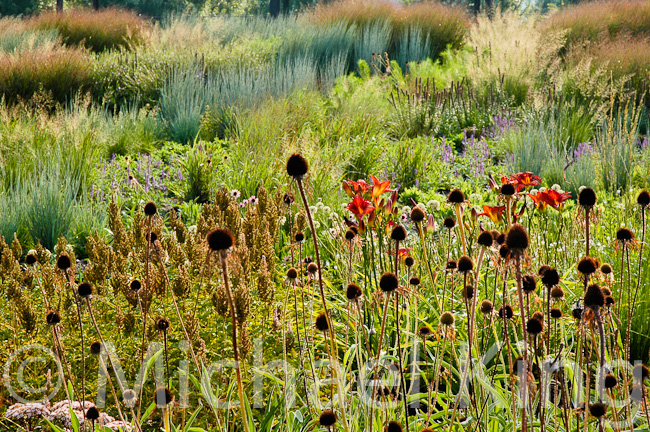 The Lurie Garden in downtown Chicago is a case in point. This small park is nothing more than a roof garden above an underground car park. The idea is to make an emotional connection with the once extensive grass prairies of mid America by growing wide drifts of native Panicum grasses and flowering perennials such as Agastache, Eryngium and Echinacea. However, the intention is not to recreate a prairie, only the idea. Public parks need to be colourful so drifts of european salvias and onions as well as oriental daylilies are needed to make a satisfying picture.

These naturalistic schemes are no more natural than the herbaceous borders they have replaced, but they can be engaging and satisfying, when well executed, as might be any form of contemporary art. What is needed is a more honest term to use when talking about them.

“Mixed perennial plantings” says nothing about the individual plants that they contain nor the associations they may attempt to make, but does more accurately describe the new style of perennial planting we are increasingly exposed to. The other term we hear a lot is “prairie planting schemes’ but these are rarely true to their namesake as they invariably contain a diverse assortment of plants from many different countries, even continents; just one example will make my point here – the ubiquitous Miscanthus sinensis grasses. 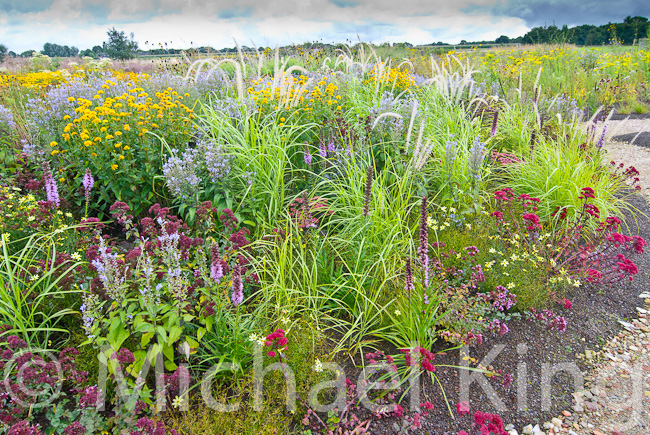 I have been using the term “perennial meadows” for some time to describe my own take on naturalism. By meadow I mean grasses, mixed with perennial flowers, on a domestic scale – as to me meadows are man-made habitats albeit open, informal and associated with the countryside beyond my city boundary.

The labels we apply to what we do are often no more than marketing terms to promote our practice and I am no better than anyone else in this respect. The one term that really should not be applied to current trends in planting design is “new” as no sooner is it applied than it becomes redundant; some examples of the “New American Garden” are nearly thirty years old.

The current style of perennial planting is nothing more than a response to what came before it and an affirmation of good practice in contemporary thinking: respect for nature, low in environmental impact, wildlife friendly, eco….. The one thing these schemes are not is natural but they can bring us close to the idea which is really all that they are about. Let’s enjoy them for what they are and not try and make them sound more important than their reality.