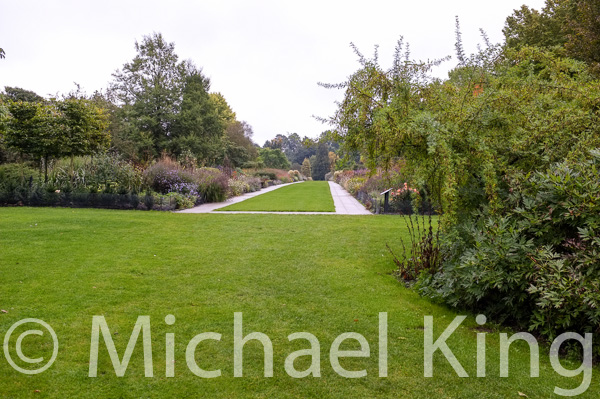 During my recent short trip to England where I was specifically studying shrubs – see earlier post – I took a look at two “new” (at least to me) large-scale, public, perennial planting schemes. One scheme was clearly designed to impress, the other succeeded. 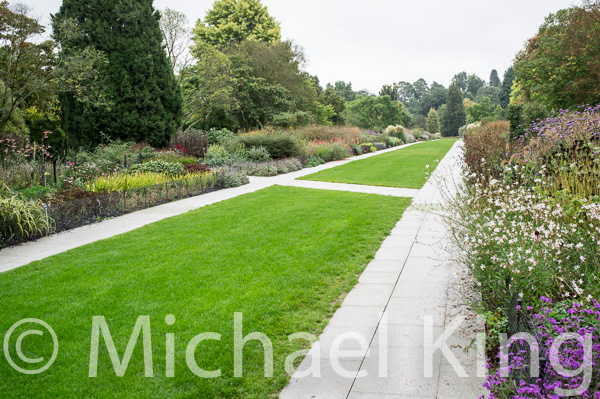 To be fair, designers are commissioned to create something stipulated by their clients. Their own signatures will hopefully shine through, however, the setting, the scale, the scope and the final impact will be dictated by those actually paying for their work. 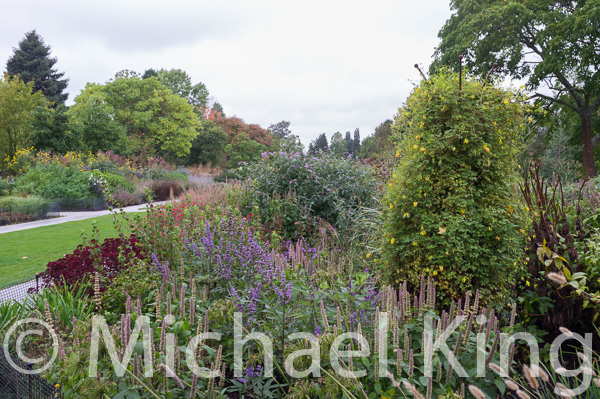 The Centenary Borders at the Sir Harold Hillier Gardens were opened last year to commemorate the Queen’s Jubilee and the arboretum’s 100 year anniversary. These are claimed to be the largest double borders ever created in England and contain more than 30,000 plants. 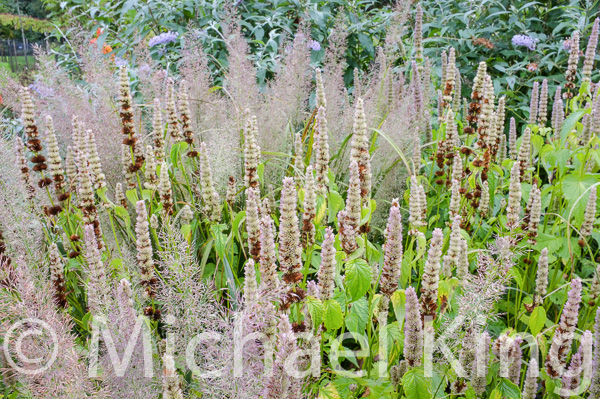 Clearly a huge amount of work and thought has gone into their design. Complex combinations of perennials and large numbers of ornamental grasses are assembled into a kaleidoscope of associations to inspire the visitors to a garden that is otherwise used to display a magnificent collection of trees and shrubs. 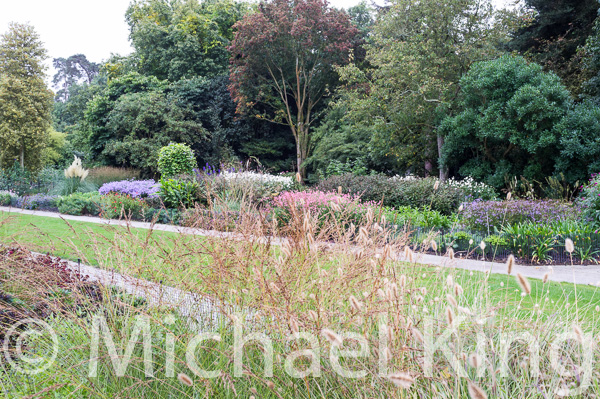 The Centenary Borders were designed by Julia Fogg Associates and the garden’s own horticulturalists and are certainly impressive. However, it did not take me long to walk the 250 meters of their length. What became very quickly clear to me was that the larger a planting scheme becomes, the bolder the design concept needs to be. Even though the many different plants being used were familiar to me and I love ornamental grasses, there was just too much of everything for me to want to linger and look. 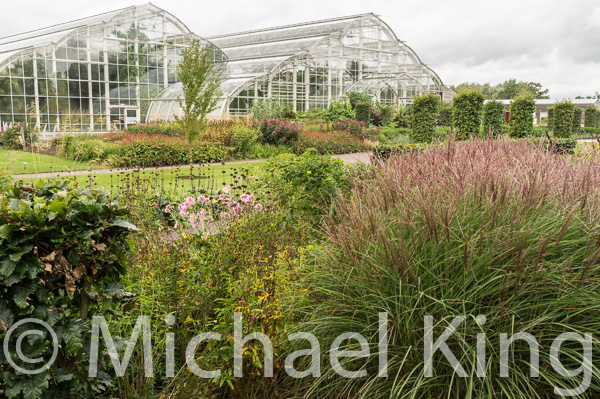 The next day I visited nearby Wisley Gardens, the main garden of the Royal Horticultural Society. The garden I know well, but it was the perennial plantings surrounding the “new” conservatory which I wanted to see. These were designed by Tom Stuart-Smith a few years ago to complement the new conservatory. 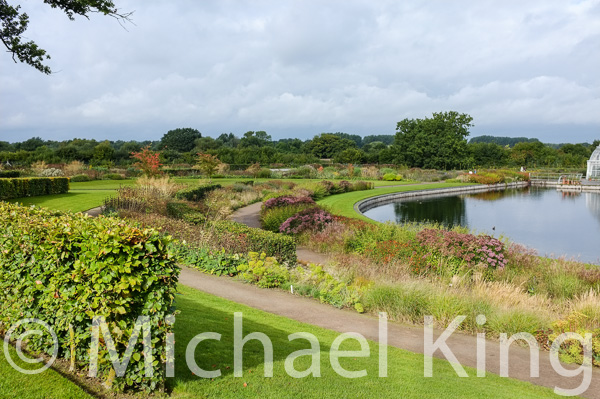 The planting is arranged into a series of interlinking concentric circles that surround a semicircular lake. Beech hedges as columns near to the conservatory’s entrance and as broken strips of low hedging are used as an embracing element, with each “border” being given a subtly different planting theme, but with bold clumps of similar plants being used throughout the design. 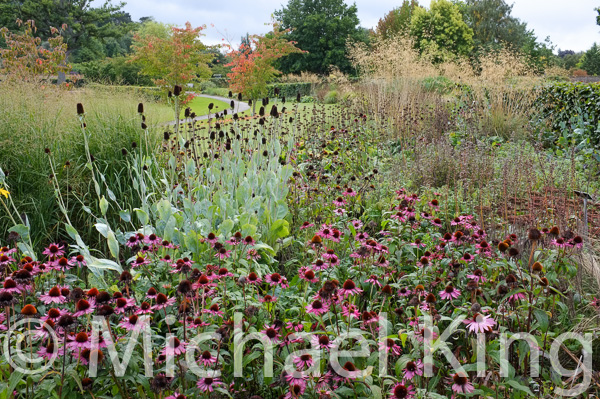 Here were many of the ideas I write about over perennial meadows to discover: coherent blocks of planting creating a bold architectural landscape, theme plants being used to unify the planting, but also complementary plants to introduce interest and variety. On such a large scale I was especially interested to see individual shrubs and trees being introduced here and there as complementaries which is where my current thinking about the use of shrubs and trees in smaller gardens is currently leading me.

To say that the Wisley borders were simple and understated would be incorrect as they contain a very diverse pallet of plants, but the difference with what I had seen the previous day was glaringly obvious. Here the huge scheme had an all embracing theme. In October, clumps of flowering miscanthus grasses and eupatoriums created linking elements throughout, but there was variety to discover everywhere as one wandered amidst its intertwining borders. 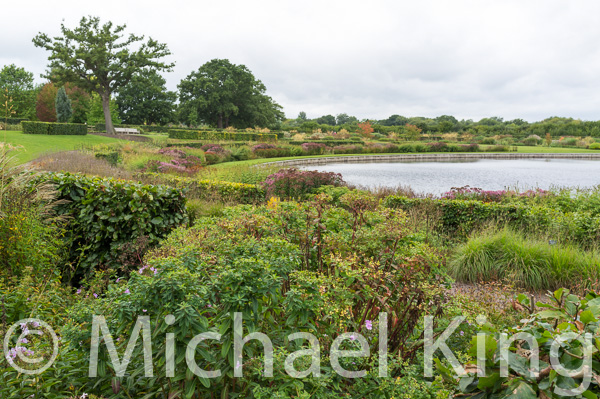 This is not meant to be an objective review of these two schemes. In fact, my comments are totally superficial and based on a flying visit without any preparation or investigation into the design objectives of the two design teams. Just one day’s impression at the end of the summer was not enough to give either scheme the attention it truly deserved, but what it does do, is give an insight into just how public schemes are appreciated by those who visit them.

The Centenary borders at Hillier’s garden are clearly meant to impress and provide a great deal of information about the plants they contain and how they might be used together. The Wisley, Conservatory plantings created a world in which to loose oneself; I could have walked around there for hours, even though on the surface there was far less to see. 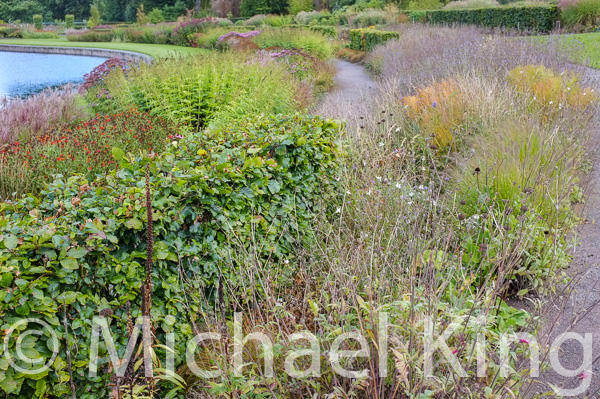 England is finally coming to terms with naturalistic planting ideas that originated in central Europe in the second half of the last century. What is interesting is just how now that the english have assimilated the newer (wilder looking) assortment of perennials they are starting to use them in their own way and not simply copying the trend of the Dutch Wave. Like breakers hitting the shoreline these new perennial plantings show a vibrant shakeup of ideas and cultures with obvious English overtones. The sensitive use of shrubs and formal elements within an otherwise sea of wildness is bringing something lacking to what has been heralding as “new wave” for over ten years now. Both of the schemes I have highlighted here deserve much more informed interpretation and both illustrate significant steps forward in thinking and application.

Bravo to both clients for giving these designers the chance to fully explore their individual approach to this fascinating subject – the use of perennials in public plantings. Planting design has clearly taken another step forward with the English finally playing a leading part.