In 2005 Amsterdam was named as The Elm City of Europe as it has more than 75,000 elm trees, many some 80 to 100 years old, growing along the sides of its canals and throughout the city’s parks. In fact, Amsterdam is one of the most densely wooded cities in the world with some 400,000 trees which can be compared with Paris with just 95,000 and even London with only 500,000.

When the elm trees release their seeds they fill the sky and clothe the ground for a couple of weeks every spring. Looking out my window I can see that the seed fall is just about ready to begin. It may be late this year, but it’s going to be heavy.

This year Amsterdam is celebrating 400 years since the start of building its famous canal system which defines the city centre. The Springsnow festival is just one such cultural events being held: attend lectures, make a cycle tour along the elm route, look at art inspired by and made from elm seeds or read poetry on the theme. It all seems to offer a welcome start to a summer of celebration.

Dutch elm disease is an unfortunate name for the disease that wiped out 25 million elm trees in Britain in the second half of the last century and thereby changing the face of the country forever. The disease did not come from Holland but was identified by research scientists here in 1921. Initially the disease strain was mild, but unfortunately in 1967 an import from North America of Ulmus thomasii introduced a far more virulent form – the rest is history. 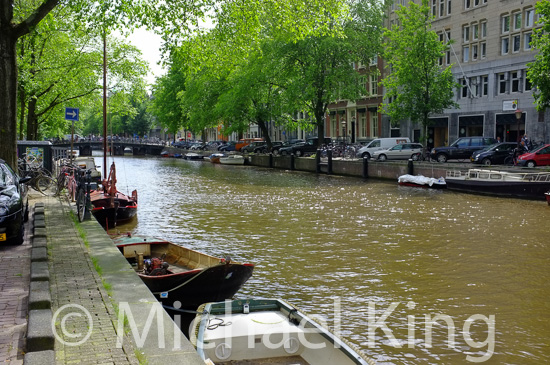 By careful management and replacing losses with disease resistant hybrids it is possible to retain these majastic trees. Amsterdam has a full time tree specialist caring for its elm trees which guarantees that its spring snow is not going to be a onetime event but something to look forward to every year. Here is a short video by Bram van Alphen to let you see what it is all about.