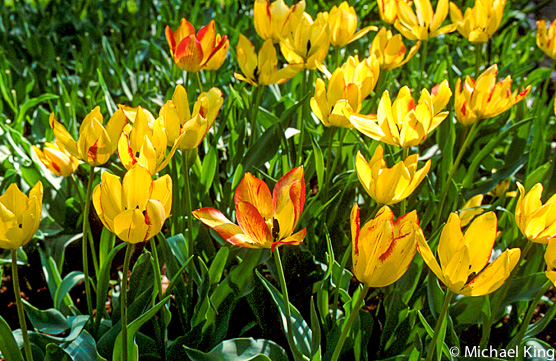 Tulips are too familiar for their own good which results in them being used in ways in our gardens that fail to exploit their many qualities. One of the biggest misconceptions is that they are cheap and easy. Yes of course they are cheap if you buy a sack of yellow tulips at the garage whilst filling up the car and drop them into a hole in the front garden in anticipation of a splash of colour the following spring; they cannot fail and in truth they will not disappoint. But: 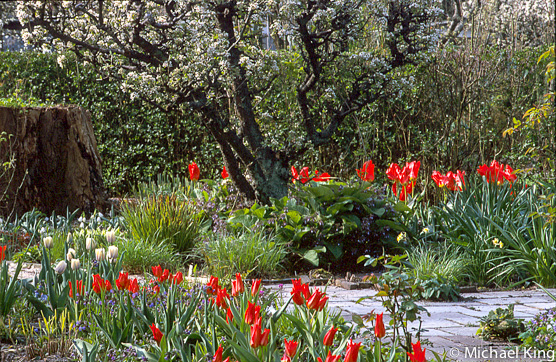 I have spent more money on planting tulips in my own garden than on any other plants there; for the price of a tree that will be with you for a lifetime the box of tulips that arrives in the autumn is likely to exhaust itself the following spring., just like a firework display they can be over in a flash. 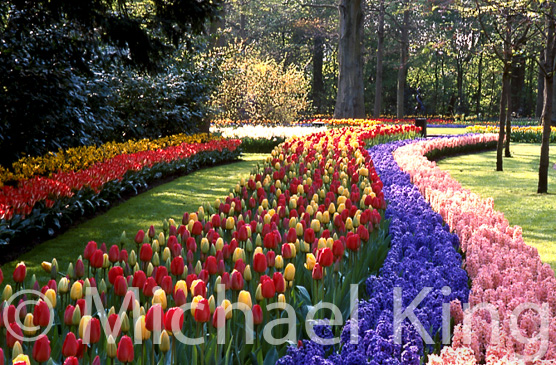 The way tulips are used in most gardens fails to take advantage of their various qualities and yet they continue to be used to add sporadic splashes of colour to our spring gardens following the same approach we see being taken in public parks. 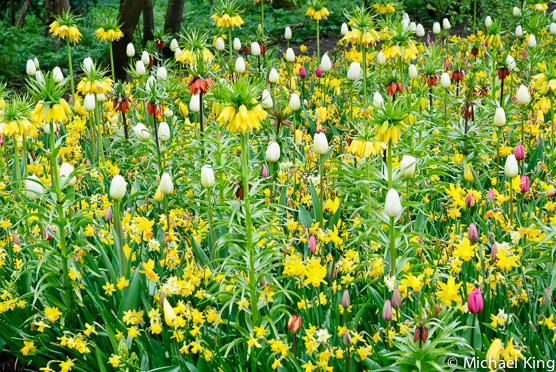 In truth, some sensitive gardeners use tulips with great creative flair mixing them into their borders in harmonious or maybe contrasting associations with other spring flowering bulbs, perennials and shrubs. But here again we see the same tried and tested combinations being used; the dark tones of Queen of Night are now the epitome of good taste in gardens as far apart as Washington DC, London and Stockholm. 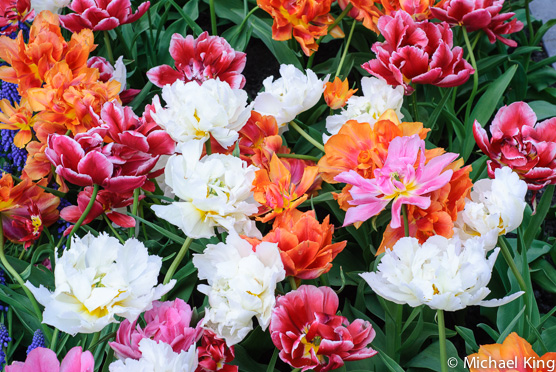 Did you know that there are fifteen classes of tulips which group them in ways that reflect their flowering times, their flower shapes and their heritage? Single Early, Finged, Double Late and Kaufmanniana groups are examples which can start to lead us into finding different uses for the more than 6000 forms currently in cultivation. And yet how often do gardeners end up buying a sack of yellow Triumph Group tulips whilst doing the weekly shopping and confirm the belief that all tulips fail to regrow after their first spring and should be treated like annual flowers?

Triumph Group tulips were deliberately created by Dutch bulb grows by crossing early and late flowering cultivars to find medium height flowers that would make sturdy plants for mass bedding in public parks and also be ideal for growing as cut flowers. They have been successful in both respects and today represent 45% of the total tulip bulb production in the Netherlands, but don’t expect them to become permanent members of your garden’s borders. 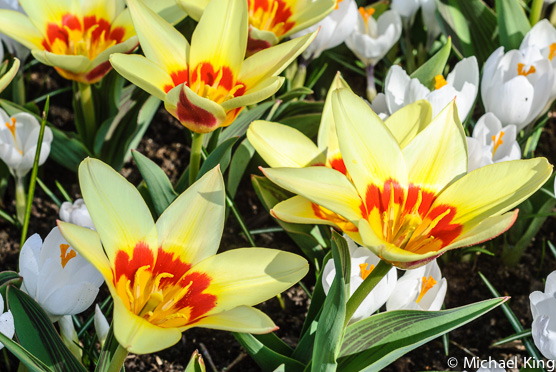 Other groups of tulips, however, are much closer to their wild ancestors and make far more durable garden plants; these are the Botanical Tulips including the early flowering Kaufmanniana Group, the so-called waterlily tulips, Fosteriana, Greigii and the many other random species gathered together in the Miscellaneous Group. Here is a world to explore for the true gardener filled with jewel -like flowers very far removed from the battalions of Darwinhybrid Group tulips to be found filling the battle fields of your local park. 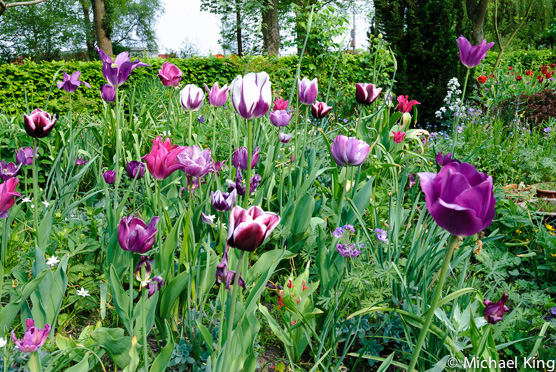 Don’t plant tulips in small groups of ten from the sacks of bulbs bought on impulse, but instead look at the group as a whole and combine them in ways that exploit their different qualities. To start with, if you only plant one type it will only be in flower in the garden for three weeks if you are lucky. Bring together tulips from the early, mid-season and late flowering groups and suddenly you have a scheme that is effective for six to eight weeks at the time of the year when your garden needs a kick start. 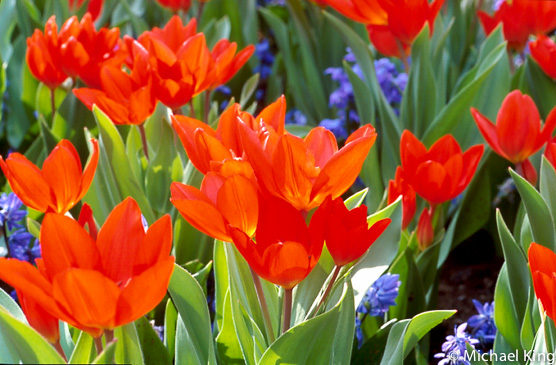 Queen of Night tulips are mid to late season flowers and lend themselves to combinations with early spring flowering perennials and shrubs, but four weeks earlier there is far less in flower in the garden and this is where a drift of a low-growing species such as Tulipa praestans ‘Fusilir’ comes into its own. This virorous tulip is no more than 8 inches tall, but it bears between four and six vivid orange flowers per bulb that open over an extended season. This early in the season it will not hidden by its neighbours when spread through a mixed border and should be used in quantity to fill your garden picture; fresh and vivid in the early spring sunshine. 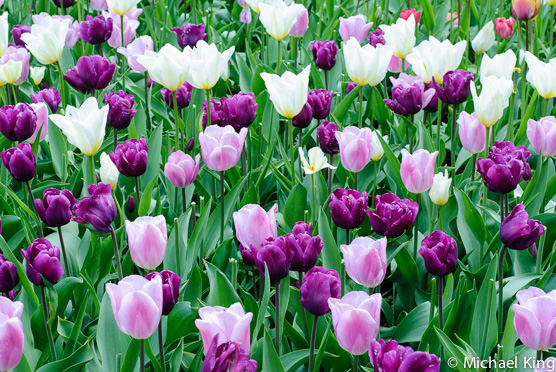 Glorious, glowing colour is what what the tulip can offer us and we should find ways of creating mixtures of these to make full use of the wide range available. Sometimes I will mix many different types of a single colour, say yellows, purples or oranges, to create a community that will fill a border planted with yellow flowering perennials such as euphorbias. 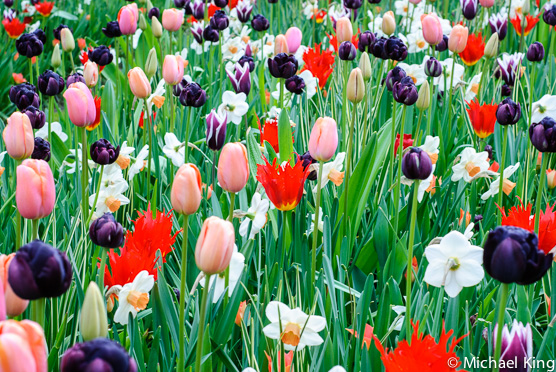 More complex mixtures are possible with contrasting flower forms and colours, but this requires far more care. A new trend in the Netherlands being promoted by the bulb growers is to offer customers ready made mixtures. Some are very carefully considered and some in my opinion are too subtle for their own good, but others look more like the season’s left-overs thrown together. 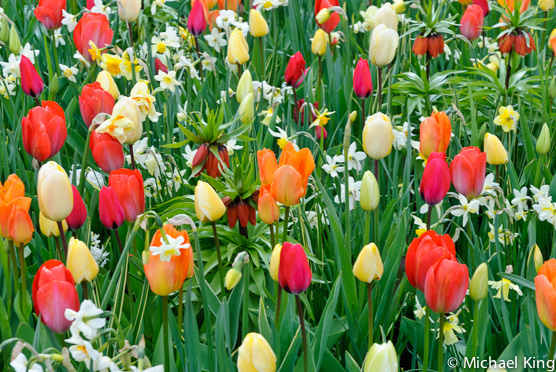 One dubious trend is the inclusion of daffodils in these mixtures. Some of the mixtures using small flowered narcissus cultivars are quite pretty, but the character of the larger daffodils with tall aristocratic tulips look simply ridiculous. Taste may play a role here, but don’t forget that tulips originate from open steppa landscapes and daffodils are from the woodland edge which is why they do not really make natural neighbours. 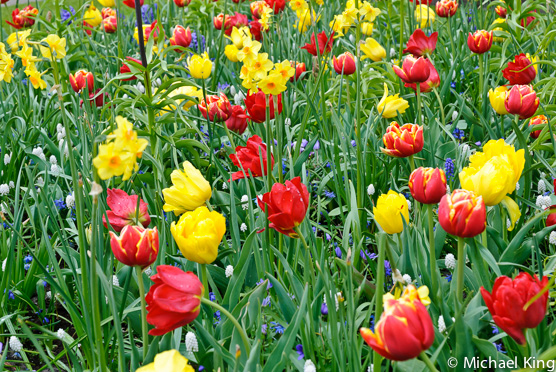 With the spring being very late in northern europe this year, our tulip season is only just about to start, but what better time to look at as many types you can find and think carefully how best to combine them, either with themselves or with other types of plants.

So, my message is to look at the wider picture when planting them, be creative and don’t simply copy what you see everywhere else. Unfortunately, your bank manager may not be too happy with this timely advice.