Its official, the last day of February marks the end of the meteorological winter and this year its a day later. Or at least that’s what my weather lady tells me on Dutch television. I always had in my head 21st March as the first day of spring, but no, that’s the vernal equinox; and this year its on 20th March.

But none of this really matters, as gardeners we have to use our eyes and act accordingly. What a strange winter we have had here in the Netherlands. For most of the season we heard it was the warmest on record, and the garden stayed green and lush more so than I can ever remember; the weeds in our gravel paths were clearly happy. And then at the end of January winter arrived – only a month ago. For three weeks the canals in Amsterdam froze and the natives were ecstatic. I loath the cold, but now it has gone, winter has come to an end, its official, and gardening can begin. 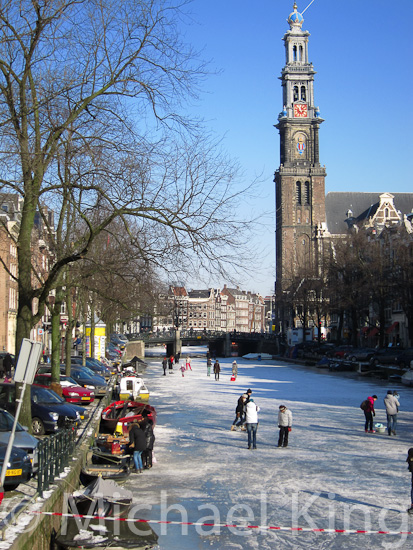 The cold snap at the end of this winter has delayed my plans to get out and start tidying the garden, but the clock is ticking.

My ideas for perennial meadows are that they should be left alone in the winter months. In fact, they should be designed to look reasonably good in the winter months. But once there is a chance in late winter – February here – everything should be cut down and either tidied away or broken up and dropped as a mulch on the ground around the crowns of the plants. Because we use a lot of spring flowering bulbs to make the meadows look exciting at the start of their season, it is important to work over them before the noses of the bulbs pop out of the ground.

This year is going to be a challenge, because already I can see tulips and daffodils well on their way and things such as winter aconites and snowdrops have been in flower since Christmas.

So my message, in this my first post of the new gardening year, is to get outside soon and start clearing up the chaos of winter. Tomorrow is officially the start of spring and the plants are already ahead of the race.

Maintaining perennial borders at the end of winter

See what I wrote about the annual tidy-up last year for more thoughts on the practice – here.