This is an ornamental grass I have used mainly as a pot specimen or as a front of border edging plant in the past, but lets think about how we might use it as a theme plant within a mixed perennial meadow planting scheme.

The green leaved species can grow into substantial wide arching clumps when settled in good soil after a few years and is a good choice for wide drifts of ground cover. The various yellow variegated forms, the best known of which is ‘Aureola’, make good specimen dot plants, but I have never felt that they would make restful drifts within a naturalistic planting scheme. However, the arrival of ‘All Gold’, a bright-yellow non-variegated cultivar has sparked my imagination. It is a lower growing, slower spreading form than the species and is probably best in partial shade especially in warmer climates. Here in The Netherlands we can grow it in sun or shade where the intensity of its colouration will vary accordingly, but wherever it is used it introduces a fresh, light arching foliage texture.

How many plants are needed to create an effective ground cover is still something I need to discover as the plant has only been in may garden for a year and like most good grasses will not really begin to show its full vigour until its second or third summer. However, I am basing my planting densities on the conservative side of ‘Aureola’ and what I have observed in other people’s gardens.

This, the first of two schemes, is for partial shade; the sort of situation near to buildings that cast shade for part of the day. In winter the foliage is dead, but will remain attractive in some gardens for a time. However, I would want to clear it away early and leave the ground free for a bold display of snowdrops. These I would follow with a display of hellebores – white or yellow of course, as these are the most effective in gardens – see my earlier post on these here.

The coarse, dark-green hellebore foliage will contrast with the yellow grasses later in the summer and for a similar reason, and the bonus of its early spring flowers, I would also include in this scheme my favourite epimedium – E. rubrum.

For a small space this simple scheme of three perennials and one bulb species is probably enough. For a larger area I would probably add something taller growing with late season interest. For example, widely spaced clumps of one of the green leaved species of Actea. These perennials, formerly known as Cimicifuga, form robust clumps of large, textured foliage and in late summer they throw up tall candle-like flower spikes 3 to 5 feet in the air. You will be more familiar with the black/purple leaved cultivars such as ‘Brunette’ but this would form too strong a contrast in my opinion – there are many exciting species and cultivars to try, my selection is just one option.

In a sunny situation this grass will be more golden yellow and probably faster growing so long as it does not encounter drought. The purple/violet flower spikes of Stachys officinalis ‘Hummelo’ above dark green clumps of wrinkled foliage will make a good contrast in mid summer. I would plant small islands of this (3 to 5 plants) at intervals amidst the wider drifts of Hakonechloa grasses as individually they will appear whispy and lost. To these dark islands of colour I would add a single plant of Helleborus argutifolius which would flower in late spring and bring additional foliage contrast to the scheme for the rest of the year. However, this species may not be hardy in your particular situation and could be left out or substituted with something similar.

The rough textured leaves and yellow flower spikes of Phlomis russeliana will stand out boldly amidst the grasses and for later flower impact the equally bold leaved hosta ‘Royal Standard’ is a reliable plant for such a sunny situation. This hosta contributes as much with its flower display as its shiny green foliage and as an extra bonus the flowers emit a noticable scent when placed in a sheltered setting.

As far as complementary plants are concerned I could not resist adding Tulipa sprengeri to the first scheme as this is the only tulip to thrive in partial shade. The scheme for an open situation would be the perfect setting for one of the other species tulips such as Tulipa batalinii and perhaps for late season colour a few asters such as Eurybia macrophylla ‘Twilight’ would benefit both schemes as it thrives in both sun and partial shade.

Now all that remains is to bulk up my stock of Hakonechloa macra ‘All Gold’ and find a space in my garden to trial one of these schemes, or perhaps I have inspired you to have a go on my behalf! 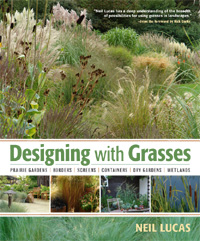 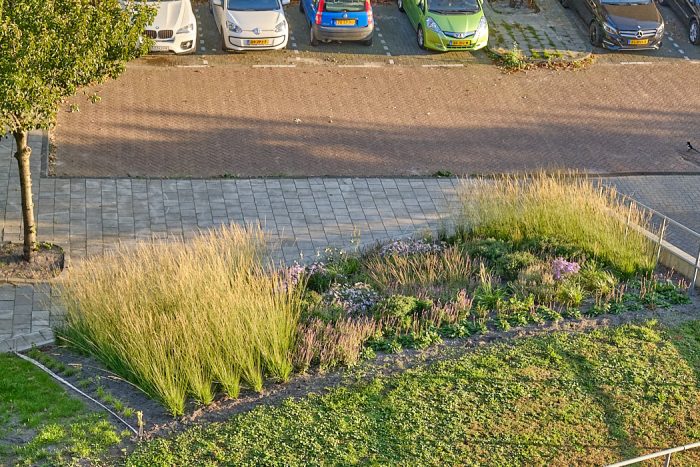 6 thoughts on “Using Hakonechloa macra Grass in a Perennial Meadow.”