The lawn is dead, long live perennial meadows – this has long been my philosophy. Last week I was in a conventional garden with grass paths and island beds and it really seemed strange, but reassuringly nostalgic! 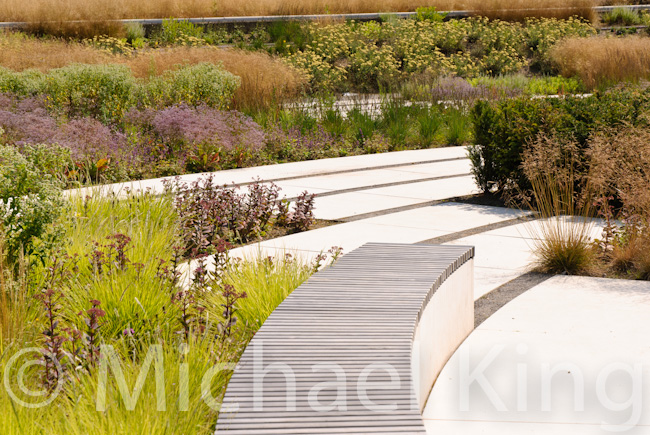 Finding the right plant for the growing conditions you have to offer and using it boldly is a fundamental principle for designing any successful planting scheme. The next challenge is putting plants together that will grow side by side without competing too much with one another. The aim is to cover the soil with the vegetation of the plants you want to grow and thereby suppress any unwelcome weed growth. But plants have their own characteristics and react in unpredictable ways in almost every garden situation. I constantly trial plants, but so often when I think I know what they will do I get a surprise.

My current failure is a double perennial meadow border, fortunately in my own garden, using molinia grasses, heliopsis, echinaceas, nepeats and trifolium clovers. The first year the local rabbits took a liking to the clover, the second year the heliopsis and nepetas (mints) grew significantly taller than I had known them to do elsewhere in my garden and this year, presumably because of the unwelcome competition, the echinaceas in one of the borders died out completely; only the molinia grasses did what I had expected! I have now removed all but the grasses and have started to plan anew, a less dynamic, meadow.

When it works the challenges of the perennial meadow are fully rewarded, but maintenance needs to be kept to the minimum if the philosophy of naturalistic meadow gardening is to be upheld. As a gardener, in my own space, I have the knowledge and time to intervene but for clients and especially in public spaces where unskilled staff are used for carrying out maintenance, a perennial planting scheme has to be simple and easily kept up. With this in mind mass planting of perennials is often held up as the way to proceed – however, I don’t agree.

I do mass the same perennials together to make a block of vegetation that forms part of the ground plan of my designs; sometimes these blocks are of one species such as a grass, a salvia or a sedum and sometimes these are of a limited range of different perennials, rarely more than five,  which form the basis of my, so-called perennial meadows. The terminology is sometimes confusing even though the visual effect we are talking about is quite straightforward and familiar to all.

The mass planting of a single species can create a bold visual impact – for example, a large group of lavender or salvias in full flower. Maintenance is easy, all the plants are the same so they can be cut back at the same moment and any weeds are obvious. However, the moment the plants have passed their peak the effect is gone, should they become infected or attacked by pests, the problem will be very obvious and the argument that unskilled staff cannot maintain a more complex mixture of species is spurious. Once the gardeners can recognize the three, four or five plants used in one of my mixed planting schemes they can effectively go to work and at the same time the mixture has the potential to include plants that flower over different periods of the year and form interesting relationships with one another and thereby create a far more engaging design element.

The traditional herbaceous and mixed border also masses plants together; for some reason I have never understood, we are told to plant in odd numbered groups such as threes, fives or sevens. These groups are set out to contrast with their neighbours to form regular or abstract patterns. When working on a larger scale, such as a public park or planting alongside roads and walkways the scale needs to be different. The numbers of plant to be used multiplies to hundreds, even thousands, but these masses of perennials still need to be assembled in contrasting zones in a perennial meadow just like their counterparts in a domestic border in order to create an effective display. The scale may be different and the distance and speed at which we view such schemes may be greater, but they still follow conventional methods for designing with perennials.

The approach I prefer takes perennials out of the picture frame of the traditional herbaceous border that is conventionally viewed from outside into arrangements that encourage us to enter and engage with them in ways that are evocative of the freedom I associate with open countryside. I am attempting to move away from simply creating a pretty picture and instead making a statement about nature, interrelationships, memories and passions.

Using perennials on a large scale, be that either as a replacement for a domestic lawn or as an extensive meadow within a parkland setting, requires that we seek ways to minimize the time and effort involved in maintenance. By restricting my meadow schemes to a limited range of species I endeavor to keep the  complexities of maintenance to a minimum with all of the theme plants being treated in the same way – no pruning, staking or dead heading and a once yearly clear up.

My mixed perennial meadow schemes are punctuated by both individual complementary plants and blocks of massed perennials to both bring focus and structure to the overall design as well as extending their season of garden impact. The precise ways that these elements are arranged create patterns and textures which play a significant role in determining the total impression and will form the basis of a later article in this short series on perennial meadows.

The term matrix planting is often encountered in the media but seems to be loosely defined. Probably any random arrangement of perennials (and/or shrubs) that in some way looks natural attracts the label. Perennial meadows and even large scale mass planting schemes as associated with the New American Garden movement could be termed matrix planting, but as we shall see their is far more to them than simple throwing together a random assortment of plants that look nice next to one another. The New American Garden as conceived by Wolfgang Oehme and James van Sweden evokes the pride and nostalgia attached to North American prairies, now sadly decimated. In different parts of the world, designers are searching for their own meanings and models to communicate a range of contemporary ideas. Hopefully you will join in the fun.