Paintings we frame and consider as art. Gardens are sometimes considered as art, but the elements we use to frame them form part of their design and maybe also part of their “art”.

Here at Perennial Meadows we are concerned with perennial planting schemes as part of a garden’s design and many of the considerations that an artist must grapple with are common to both disciplines: focal points, perspectives, scale, contrasts, harmonies, colors, textures and above all else ideas, ideals and emotional expression. However, a painting in a frame is fundamentally different from a flower border in a garden setting and we need to understand and exploit the differences to make something more than just a decorative detail. 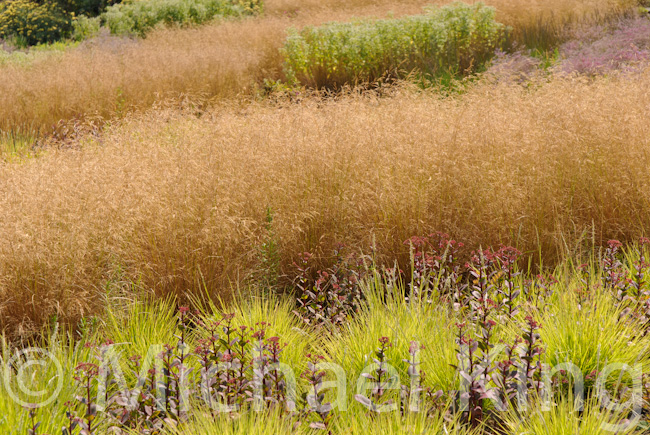 It goes without saying, even though I am going to, that the materials we work with are not paints but plants. Plants grow, change over time and react to the available growing conditions. A painting remains the same once finished, but a planting scheme is in a constant state of flux. When designing any planting scheme we are usually striving for a preconcieved image and go to great effort to put together species that will create a stable composition in which the different plants live in harmony with one another for as long as possible. For example, a repeating rhythm of tall and shorter growing plants may be our aim, but what happens if this, over time, begins to break down. We have two options: either we intervene and control the relationship between the two groups of plants preventing any one from overwhelming its neighbours or we accept the changes that take place over time as part of the “art”.

In practice I use both strategies. The main, theme plants, in any planting scheme are intended to be there and remain over time to make whatever their planned contribution to the design, but sometimes I will include a smaller plant that in the early stages of establishment will fill in the spaces between its neighbours, but eventually will be pushed aside as the scheme matures.

I can think of other occasions when my plans have taken another direction (gone wrong) and one plant has taken over at the expense of the others. Do you accept the change that nature has brought to your scheme or step in and do something about it? As a gardener you can choose, but it is this very dynamic nature of planting design that is intrinsic to this particular form of artistic expression.

My own garden is predominantly perennials. In late winter we clear all the debris away to reveal what to me represents a clean canvas. The openness is such a relief after the overwhelming clutter of the previous summer and signals just one of the rhythms I aim to foster in my own private space.

Scale is also a defining aspect of garden art. Few paintings are big enough to loose yourself in, however, I suppose, some are powerful enough to draw you into their realm in spite of the confines of their frames. But gardens contain viewpoints and invite motion and exploration which is yet another tool to be grasped when designing any planting scheme.

If one thing typifies contemporary trends in planting design it is the movement away from gardens functioning as merely a setting for a building and towards a space for personal expression and enjoyment. The traditional flower border was much closer to the picture in its frame than today’s perennial meadows that we can enter and loose ourselves within. Lawns are being dug up and replaced with fields of flowers crossed with paths along which to wander. This site aims to encourage its followers to develop their own ideas and forms of self expression. Perennials are my medium and in the following series of posts (Perennial Meadows – ) I will be summarizing my own methods and discussing some recent thoughts about how my ideas are developing. How do we express increasingly complex ideas and at the same time make clear, powerful and sustainable planting schemes for both public and private spaces?

2 thoughts on “Perennial Meadows – Designing a painting is fundamentally different from designing a planting scheme.”