To generalise, perennial plants are soft, loose, frothy and amorphous when we compare them with trees and shrubs and especially so when we clip trees and shrubs into shapes and hedges. When designing gardens we are told to start with the main framework using trees, shrubs, hedges, paths, walls and any other built structures to define the space; thereafter, come the perennials to add colour and texture. This all makes sense even though I am sure we can all think of exceptions to this generalisation.

Bringing structure, focus and impact to any perennial planting scheme calls for two aspects to be addressed. Firstly, the planting/meadow needs fixing into its setting and secondly, maybe, it needs internal structure to hold it together. 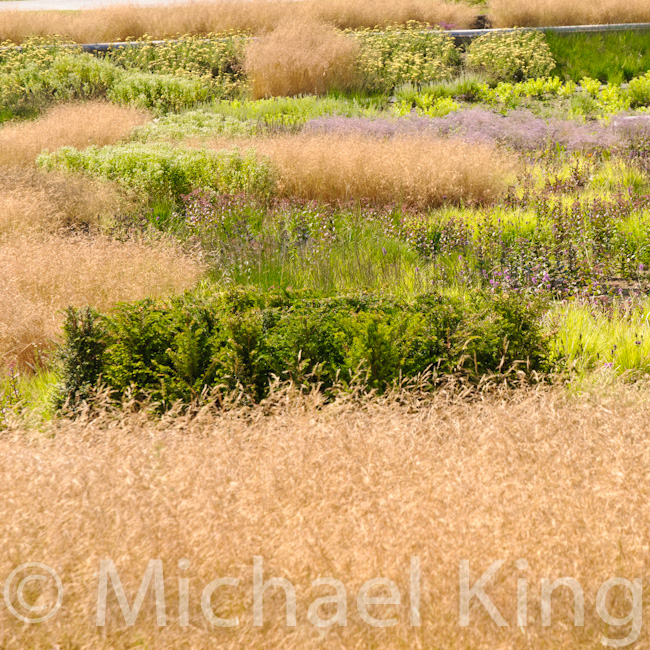 The traditional approach to placing perennials in a garden is to frame them with hedges and paths. The English herbaceous border is usually planted in front of a tall trim hedge and approached over a smooth lawn. Together these elements create a uniform framework in which the frothy exuberance of a summer flower border can explode. Contemporary, European gardens have often played with this model by dropping blocks of clipped shrubs such as yew and hornbeam within or adjacent to blocks of perennials to create three dimensional landscapes. The advantage of this approach is that by bringing these permanent structural elements inside the picture rather than using them only as a framework, the planting area retains some structure even in the winter months when the perennials are generally ineffective.

Hedges require maintenance and often the same goal can be reached by planting shrubs and small trees that remain in scale with their surroundings. I have experimented with various slow growing conifers over the years which have the added advantage of being evergreen. The challenge with all of these, however, is that they may eventually grow larger than desired and in doing so compete with the perennials surrounding them and alter the proportions of the overall scheme. For this reason I tend to exclude shrubs from my perennial meadows and instead set them apart in separate planting areas. All cast shade on their surroundings and this is another reason I find problems with them amidst my perennials.

Paths alone can be a powerful way of organising perennials in our gardens. Think about the order beds in a botanic garden. Every bed contains different plants but their regular grid arrangement is bold and effective. By dividing our perennial meadows up into a series of beds in exactly the same way we gain access to their interiors and make closer contact with their contents. One practical point here, make the paths wider than your first design sketches might show; the negative spaces within garden landscapes are just as important as what surrounds them.

Structure and focus within a planting scheme can be achieved in a variety of ways, all of which revolve around the ways we organise their contents. The traditional perennial border used patches of the same plants in contrasting groups for maximum impact. We can do the same in a perennial meadow even thought the planting pallet may be more restricted. By repeating blocks of the same plants across the ground we can introduce pattern and rhythms into our designs. My own approach is to use plants in various percentages which when evenly distributed across the ground, automatically organise themselves into repeating groups even though these are random and irregular in the way they fall into position. Sometimes, though, I like to use one of the plants at more regular spacings to add an element of formality. As ever the choice is yours.

The repetition of bold plants through a matrix of other perennials which may be lower growing, or of another colour or form, is another way of bringing impact to a planting scheme. Tall molinia grasses rising above a sea of frothy geraniums, for example, would make an effective composition which in turn could be place next to a different scheme of a more dense character, say a block of heleniums and veronicas. The alternation and juxtapositioning of such different planting schemes is yet one more way to add variety and interest to a meadow’s overall design.

My final suggestion for you to experiment with is the introducing of islands of a single species here and there into you meadow schemes. These could be created using one of the species already present in the surrounding mix of plants or it could be a completely different species that makes a bold contrast with the surrounding meadow. To simplify maintenance I tend to use this technique by arranging adjacent beds, separated by paths, one with a mixture and then another with a single species, however, there is no reason why you could not use patches of the single species within the main body of the meadow.

Massed perennials can easily become amorphous and untidy unless attention is paid to their setting and differentiation. Consider the total picture first, keep it simple and make it bold.

For more information about perennial meadows look at the Meadows 101 section of this site and for a detailed understanding of the philosophy, practice and detailed planting schemes have a look at my e-Books.