When is a meadow open as opposed to being closed you might ask. There is no answer, but what I mean by the term open perennial meadow is a meadow-like planting in an open sunny space. To me such spaces offer freedom, the mood is uncomplicated and nature is given the opportunity to express itself. In my mind’s eye a meadow should be dominated by grasses, but it is often the other things growing there that give it its special allure.

By association grasses confer a strong message of the open field, rolling hillsides peppered with poppy flowers and the lushness of the water meadow. In nature their presence is ubiquitous which is perhaps why they are so evocative when used in naturalistic planting schemes. 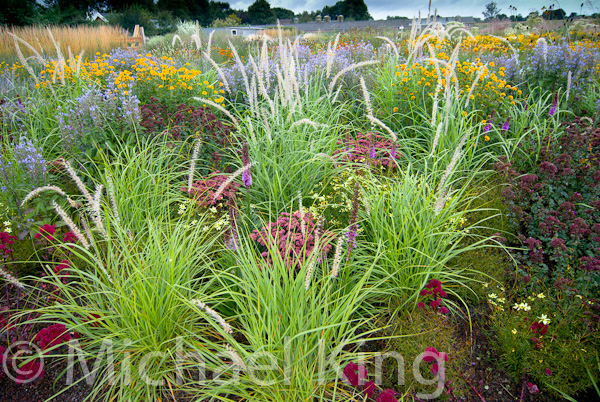 The planting schemes presented in my two newly released eBooks endeavor to capture this informal and expansive character: in book four – Open Perennial Meadows – the setting is open, sunny and relatively dry and in book five – Wet Perennial Meadows – I have used plants that do require reasonably moist soil throughout the growing season such as astilbes, hostas, ligularias and persicarias to thrive. With one exception, all the schemes contain grasses.

In most cases my designs restrict the numbers of grasses to less than 50% of the total as I personally want to see sheets of colorful flowers peppering the sward. But this need not be your aim and the percentage of grasses could well be increased to create a more uniform and potentially more natural image. In my own garden, for instance, I have an area of some 15 square yards filled with low-growing deschampsia grasses with just a few other perennials dropped in here and there. My aim was to create a low, grassy field to make a simple open space amidst the surrounding taller growing flower borders.

Open perennial meadows can replace your lawns to create an exciting alternative that is potentially far easier to maintain. Don’t be mean, make them as large and wide as you can as only when they offer you the freedom to wander through their midst will they bring the feeling of the countryside into your garden. Unlike the schemes for prairie style plantings the open meadow is comparatively low growing. It aims to open the horizon and allow the eye to wander.