This category will build into a series of articles that explain how the concept of perennial meadows has developed, where and how they should be used within gardens as well as the practical aspects of designing, planting and maintaining them.

To avoid misleading anyone it should be understood that we are not primarily concerned with seed sown meadow projects nor wild-flower meadows; however, in time these may well become part of the discussion. Here, perennial meadows are going to be created with pot-grown plants and directly planted bulbs. The idea is to create an instant effect that over time will grow and mature into a densely planted patch of vegetation. Perennial meadows take up the ideas of the current trend for naturalistic planting and apply it within the confines of small private gardens. 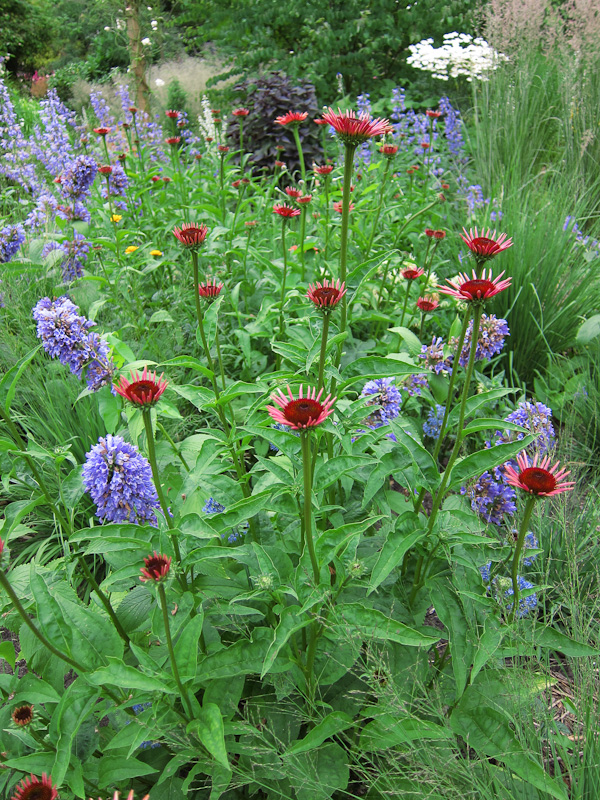 This scheme is less than one year old, but already the planting area is filled. Bulbs were followed by a long lasting display of blue mint flowers. At this stage the cone flowers (Echinacea) are about to take over the leading role whilst the grasses develop throughout the summer and prepare to dominate the scene in late summer and through on into autumn.

This is one of two identical borders in my own garden measuring some 3 m. by 3 m. – they are free standing either side of a wide path and can be approached from all sides.